The Committee on Climate Change published its ninth annual report to Government two weeks ago. This is where the Government is held to account on progress towards the carbon budgets that will lead to the 80% target to cut greenhouse gases by 2050. This is all the more interesting in a political context where uncertainty is king and climate science (and science generally) is under attack.

Overall, as the evidence-orientated Committee on Climate Change (henceforth ‘3Cs’) notes, there is good news in the UK: we have reduced greenhouse gas emissions by 42% since 1990, despite increasing GDP by more than 65% (see graph below). Incredibly, renewable electricity generation has also tripled in the last 10 years. 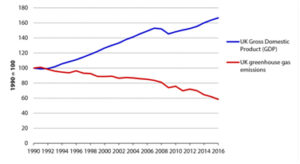 The 3Cs remind us that the UK’s 2008 Climate Change Act binds us to prepare two plans: one to reduce climate change emissions, and another to improve our resilience to a changing climate. The catch is that we are running late with both of these.

The Fifth Carbon Budget was enshrined in law on 20 July 2016. This requires a reduction in emissions of 57% by 2030 compared to the levels in 1990, but so far the UK is some way off meeting this target (see graph below). The 3Cs also remind us that many of the most significant policies relating to energy use and emissions come to an end around 2020. Introducing replacement policies alongside the huge burden of transferring swathes of EU legislation into UK law will be very difficult to achieve because of the pressures on parliamentary time. 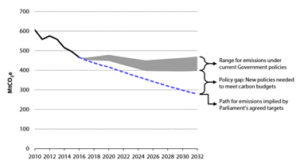 However, large scale deployment of some low carbon technologies has brought major economies of scale and significantly reduced the costs of solar and wind generation technologies, batteries and electric vehicles, and smart network controls. This brings new opportunities for decoupling economic growth and greenhouse gas emissions.

Nevertheless, as the 3Cs observe, most of the UK’s carbon savings come from emissions cuts from waste, more efficient electricity generation, and reduced demand for energy in the home (largely due to improved appliance efficiencies). We should not expect continued savings in these areas, and certainly not sufficient to meet the Fifth Carbon Budget’s target of a further 15% reduction compared to 1990 emissions by 2030.

Emissions from transport and buildings are flat overall (see graph below), despite technological improvements, and the UK has largely abandoned plans for carbon capture and storage in power generation. 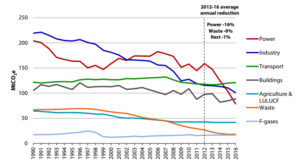 Nearly all the emissions cuts since 2012 come from electricity generation and waste. (Source: 3Cs/BEIS)

You might expect that recent evidence on climate change would have re-focused attention on meeting future emissions targets and developing strategies to make it easier to cope with a changing climate. 2016 was the hottest year on record and the first year for 800,000 years for average CO2 concentrations to exceed 400 parts per million.

Before the Brexit referendum, the 3Cs remind us, about half of the reduction needed by 2030 was expected to come from implementing the next phase of existing EU policies (especially fuel efficiency standards for vehicles, energy standards for products, and the EU emissions trading scheme).

The 3Cs say Government should intervene in the market where it is not delivering, including support for offshore wind, electric vehicles, and carbon capture and storage. They also recommend incentives and subsidies to send price signals – especially for transport, products, waste and agriculture.

All this seems sensible, although some would disagree that offshore wind and electric vehicles are still immature technologies and need further support.

They also say that addressing other issues, such as fuel poverty, will help tackle climate change. This is unconvincing, and in many cases lifting households out of fuel poverty (unquestionably a good thing to do) results in higher carbon emissions. Similarly, the fact that household energy bills are lower now than they were in 2008, on average, actually undermines the financial case for improving energy efficiency.

The 3Cs call on the Government to urgently update the UK’s Emissions Reduction Plan (last published in 2011). This should describe how it will meet the Fifth Carbon Budget requirements for the period from 2028 to 2032, and how this keeps the UK on a cost-effective path to meeting the 2050 target. They also call on the Government to publish a new National Adaptation Programme, to address the most important impacts of climate change: flooding, risks to the natural environment, and human health and wellbeing.

In relation to buildings, the 3Cs identifies these specific actions to cut greenhouse gas emissions:

Few people outside Trump Tower would argue with any of this. One concern, though, is that ‘low-carbon heating’ is not very low carbon yet: typical seasonal performance factors (indicating the multiple of heat output compared to the electricity input needed to run the heat pump, over a year) are only 2.3-3.0 for heat pumps, so carbon emissions from heat pumps are currently similar to gas heating. This is important because the Government and others have more faith in heat pumps than biomass heating – because of concerns about how much biomass we can grow in the UK, and where any extra biomass might come from.

Policies aimed at meeting targets for reducing emissions, and drawing up strategies to cope with looming climate stresses are not primarily scientific or engineering questions. They are first of all political. Although climate change was mentioned in all party manifestos for the 2017 general election, it was conspicuously absent from almost all the more prominent electioneering. How the Government responds to the 3Cs’ recommendations will be the first real test of Teresa May’s commitment to acting on climate change. It’s an unfortunate metaphor, but I’d bet it will be pushed once again to the back burner.

*Miscanthus giganteus is commonly known as elephant grass. It can grow 3.5 metres in one growing season, with an annual yield up to 25 tonnes per hectare. It makes an excellent low-carbon biofuel, and may be burned with coal in some coal-fired power plants without modification. Also a great place to hide when the 3Cs ask difficult questions.