“Carbon emissions factors” don’t sound very exciting. In fact you have to look pretty hard to find anything at all about them in the Government’s current consultation on the Future Homes Standard, which will shape the future of energy efficiency and ventilation in homes for the next 10 years or more.

They aren’t mentioned until page 83 of what looks like a minor and ultra-technical annex to the energy efficiency part of the proposed Regs – “SAP10.1” – the new Standard Assessment Procedure. For those in the know this is the complicated method of assessing energy and carbon emissions for all new homes. If design and construction does not achieve SAP then a home cannot be built. (In theory, at least.)

Developers have had to carry out modelling to show they meet the energy and carbon requirements of the Building Regs since 2006. The idea is they have to show at the design stage how much energy their proposed building will use, and what carbon emissions it will emit. Importantly, they need to show how much less carbon dioxide their building will generate compared to a fictional ‘notional building’.

In theory, homes built to the 2006 Building Regs had 20% lower CO2 emissions than homes build to the previous 2002 standards. Again, in theory, the current iteration of the energy part of the Regs required a 44% improvement on 2006 standards. And you have to show your model calculations to Building Control in order to put up a new home.

Will developers get it?

This is a headache for developers, and they typically employ an outsider to do the energy and carbon modelling. I am not going into the very intricate and detailed methods behind the energy modelling here, but you can find a 178-page description of the proposed way to do this here. One point worth noting, however, is that the carbon emissions assumed per unit of different fuels – gas, oil, electricity – make a colossal difference to the carbon calculation. In fact they make a bigger difference than a more efficient boiler or extra insulation beyond about 100mm thickness.

The important change I’m going to look at is the huge cut in the Carbon Emission Factor for electricity – from 519gCO2 per kWh, which developers and designers have used since 2013, to just 136gCO2 proposed from next year. This 74% reduction partly reflects the monumental improvements in reducing carbon emissions from power generation since 1990.

Up to a point, the cut is justified and based on evidence. But there is also a political motivation behind the change, and an optimist’s bias in predictions about continued reductions in the carbon intensity of UK power generation.

Political motivation because the Government (and many environmentalists) want us to continue to decarbonise electricity generation and at the same time use electricity instead of gas or oil to heat UK homes. Government support is useful, but tempered by difficult and unpopular decisions about new nuclear power stations and (taller, bigger) wind farms – and particularly by the Treasury’s opposition to spending to fund more decarbonisation.

Optimist’s bias because we cannot draw a straight line through recent successes in reducing carbon emissions from each unit of electricity and assume they will continue into the future. We have already almost completely eliminated high-carbon coal from the electricity generation mix. We have eeked out another 10 years or more use of the last generation of nuclear power stations (15 reactors are currently operating) – but extending the service lives of old nuclear plant cannot continue indefinitely (not safely, anyway).

Building new nuclear capacity isn’t going so well at Hinkley C – the only new nuclear power station in the UK to go ahead so far.

The graph below shows what has happened to Carbon Emissions Factors assumed in the Building Regs since 2005. The factor for electricity went up from SAP 2005 to SAP 2009, then fell dramatically in SAP 10 (never actually used in the Regs, but published for consultation in 2018), and then fell another quarter in the latest iteration of SAP. The recent steep reductions supposedly reflect the anticipated fall in greenhouse gases from electricity expected from 2020 to 2025, shown in the right-hand graph.

The SAP emissions factor for electricity is set to fall off a cliff compared to the current Regs. (Source: Tassos Kougionis)

The carbon emissions assumed for gas increased a little from 2005 to 2019, but this change is insignificant compared to the change for electricity, which has completely wiped out the historic advantage gas offered over electricity in terms of carbon emissions from heating. If this factor for electricity is adopted into the Regs next year as planned it will make it far easier for developers to meet the carbon standards if they use electric heating than if they continued to use gas boilers as they have in most cases up to now.

Electricity still costs around four times as much per kWh as gas, which may make the switch unpopular among house-buyers and tenants, even with the uplift in performance that comes from electric heat pumps. The cost impact will hit those with low incomes most, and some could end up in fuel poverty even in spite of living in low-carbon homes. (Across all homes, those with electric heating are currently twice as likely to suffer fuel poverty.)

But big UK house-builders are notorious for putting their profits ahead of the needs of future residents, and the cost of getting an all-electric house or flat through next year’s Regs will be so much lower than an equivalent home with gas or oil heating that they will find the case for electric heating becomes irresistible.

To put it into context, the Government’s favoured 31% cut in modelled carbon emissions to be required in the Regs in 2020 would very likely be achieved by using an electric air-source heat pump and NO OTHER CHANGE compared to current Regs. Whereas the same home with gas heating would very likely need big improvements in insulation, triple glazing, and a large PV array on the roof.

The upshot of this is that house builders will virtually phase out gas- and oil-heated homes as soon as they can. There is every chance that this change could reverse the big savings in carbon emissions from reduced UK electricity use since 2006 (see graph below). 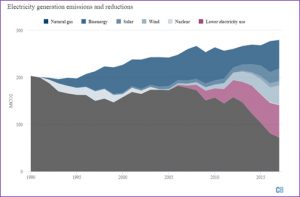 This, and Philip Hammond’s announcement about the end of gas boilers for new homes, has petrified the UK’s gas boiler manufacturers, who will have to move fast just to survive.

The point is that changing the Carbon Emissions Factor in SAP and SBEM (the equivalent and at-least-as-complicated method of assessing non-domestic buildings) does not reduce carbon emissions. If it results in huge increases in the demand for power that outstrip supplies of low-carbon electricity it might actually have the reverse effect. Unintended consequences as an arcane regulatory move switches heating from gas to electricity overnight – and with consequences.

Historically, gas was always reckoned to be a low carbon fuel (compared to either electricity, coal or oil). The emissions factor for gas in SAP is proposed to move to 210gCO2. Nearly 42% of UK electricity was generated from gas in 2019.

Conversion efficiencies run against such a low factor

Typical conversion efficiencies of a combined-cycle gas turbine are in the range from 50-60%, and larger units generally have steady state efficiencies of 55-59%. This translates to carbon emissions from the gas-generated electricity (which is invariably used to meet peak load) of around 368gCO2 per kWh. Notice that this is 2.7 times the proposed Carbon Emissions Factor for all electricity in the Building Regs. For gas-fired electricity to step in and meet a new, significantly increased peak load and still achieve 136gCO2 per kWh does not obey the laws of physics.

I asked Jenny Hill from the Committee on Climate Change (which is tasked with holding the Government to account on our legally-binding commitments to reduce greenhouse gas emissions) about this two weeks ago and she said the Committee has no qualms about the big cut in emissions assumed from electricity. She might go further still, she said, because this would push developers further in the direction of electrifying heat, and there is evidence that carbon emissions from power will continue to fall.

By increasing the demand for electric heating we will very likely increase the peak load above what the power grids (generation, transmission, distribution) can deliver. This will cause problems for the transmission and distribution operators – very likely beyond their current and already ambitious plans for network reinforcement – and also force the energy suppliers to buy more power at peak times. They cannot currently meet demand at peak periods from low-carbon generation (renewables and nuclear), so how will they ever be able to meet even higher peak loads resulting from a new dash for electricity?

The “easy” wind farm and nuclear sites have already gone. Of course there will be significant new renewable generation coming on stream in the next ten or 20 years, and very likely large electrical storage facilities, which will help to meet part of the peak load. We may also get more low-carbon power from interconnectors with the EU (although post-BREXIT it would be unwise to count on this).

But how will this ever be enough to make up the shortfall from new homes expecting the power grids to meet needs for space and water heating? Let’s take a conservative estimate. If all new homes really are all-electric by 2025, and if house building in the UK continues at its present rate of 200,000 new homes a year, with these homes fitted with efficient heat pumps drawing only 5kW (compared to 20-30kW gas boilers commonly installed in new homes today), by 2035 the peak load on the electricity grid rises by 10GW – more than a sixth of the current UK peak load and requiring more than four and a half times* the entire generating capacity of all existing onshore wind to generate.

This excludes any existing, older housing that is converted to electric heating in the interim, and any electricity that might be used to produce hydrogen for heating or transport purposes.

(There might also be another 4-8GW load at peak times because of electric vehicles, according to National Grid, although this is probably an overestimate because it’s technically straightforward to set up EVs to charge outside peak periods, and time-of-use tariffs should eventually be introduced to discourage peak-time charging.)

Carbon emissions already rise in winter (not just on paper)

Tensions on the grid are all the more pronounced in winter (when electric heating already pushes up the peak load considerably) and this can become life-threatening if more and more households are dependent on electric heating. Heat pumps have lowest efficiency when it is coldest outside, and the actual carbon emissions of power are also at their highest during peak winter periods.

Quite apart from the very obvious problem of where the power for heating will come from, there is another more subtle problem: increased reliance on intermittent renewable generation like wind and solar makes us more vulnerable to blackouts and brownouts when there is not enough power to go around. Witness the power cuts in August 2019 affecting 900,000 customers and caused havoc for people travelling by train to and from Euston and St Pancras stations in London – caused by a wind-farm shutdown that coincided with a gas-fired power station outage.

We would not attempt to defend the current Carbon Emissions Factor in the Building Regs. At 519g per kWh it is hopelessly out of date and this stale ingredient spoils the soup in most major decisions affecting emissions from new buildings. We can and must fix this. However, we recommend crunching the figures and assessing the full knock-on effects of a dramatically lower emissions factor. This must happen before introducing a change that makes electric heating so compelling for developers that they change the demand for electricity to the point where it ceases to be the lowest-carbon way to provide heating in buildings.